Things are kinda crummy right now for the rapier community for a bunch of reasons.

So I did some point control tonight and now we're gonna look at Plate 25! (It's on the right. It's also really cool.)

Prime! That weird guard that everyone says "what good is that really?" about. This! It is good for this! (And other things too, but this!)

Anyway. "This wound of first against a third would happen this way."

Fencers begin at misura larga, in Third, on the outside. Each is forcefully pushing their blade against the other. (This is one of those positions that none of us should ever want to be in, but here we are.)

You should quickly turn their hand into First. While you are doing that and lifting your hand, you advance toward the opponent and hit them. (Straightforward, which is why I didn't really break this down into steps like I have previously.) I've found that it works well if you're rotating around with the wrist, and not a bigger arm motion. The strike can feel odd because it's not necessarily in line with the blade like a lunge, but it does work out.

Fabris points out that your opponent's sword should be underneath yours; you're basically yielding around it to keep your point free and kill them. He also points out that, again, being in the original position is bad, and you don't want to be there.

That's it! Really short, but super cool.
Posted by Donovan Shinnock at 11:28 PM No comments:

The BoD does a thing, kinda, and I'm gonna talk about it.

So as most everyone who's remotely connected to the SCA rapier community knows, yesterday the Board of Directors voted on whether to institute a peerage for rapier prowess, and it was voted down.

Okay, that was disappointing in the extreme, and more than a little surprising - I'd honestly thought that it had a really good chance of passing. Then things got weird.

Instead of repeating what other people who were present said, I'll just link to the two reports from folks in the audience; this was posted by Eyrny publicly to her Facebook page (there's a full description in the comments), and this was posted by Illadore to the SCA Facebook group.

Yeah, that's a thing. Additionally, individual members of the BoD have publicly posted to their personal Facebook pages, notably Ailgheanan.

After all this I'm left with a whole lot of feelings, most of them conflicted.

The people behind the Additional Peerage committee devoted countless hours, effort, brainpower, thought, and emotion into that work. They deserve our thanks for all this, because regardless of whatever else happens, what they were specifically working for failed. Besides those individuals, so many more people had a whole lot invested in that as well, and seeing the news about the downvote was a huge letdown.

That said... what happens now?

Based on the information from the discussions at the meeting itself, as well as a member of the Board, as well as a perceived tendency to allow decisions like this to be made at a Kingdom level, we can draw some pretty clear conclusions as to their intent. That said, I really wish we could get an official statement from them as to their specific intent. In some ways, I think this was the cheap and easy way out for them - they don't need to actively change anything in Corpora, but just sort of say, "Well, wait, you could really do this all along!" That feels like they're avoiding taking a strong stance for what it seems like they're saying, which is really sending a mixed message. They went out of their way to remove the language noting rapier as an "ancillary activity" in the SCA (good!) and to specify that Crown Tournaments must only be fought with rattan, but they couldn't take the last step and state in plain language what they really want to cause to occur?

Still though, this looks like it could be a possibility for a big step forward. Based on talking to folks in person, and reading a whole lot of social media, it doesn't seem like there's a huge amount of people against this? I'm not trying to imply that it's unopposed, certainly, but I haven't seen or heard any truly vehement opposition. I have though, seen and heard a pretty good amount of folks who are neutral, cautiously for it, or absolutely desirous of rapier being included in the Chivalry.

There are probably going to be lots of discussions in the next few weeks. If - if - any decisions are made to go forward on this, it's going to be hard. There'll need to be a lot of work on each side. Will the Chivalry need to change? Almost by definition. Will the rapier folks need to accept that the Chivalry has decades old traditions to which we'd need to adapt? Assuredly. What I think is most important is that when we have these discussions, to not assume you know what the stance of the person in the other group is before you hear it, and to hear it out, and actually talk about it. Maybe there are irreconcilable differences. Maybe not, I don't know, but if we just fly off into a pile of assumptions, then for sure nothing will be accomplished.

Part of the stated reason this happened was that so many people - from all groups in this debate - said, "Well, in a perfect world, rapier should be part of the Chivalry. That won't happen, so..." Well, now we have the chance to maybe, possibly, actually get a little closer to that perfect world. It'd be a shame, I think, if we didn't honestly try. If it doesn't work, it doesn't work, but we have a chance to see.

I failed at taking pictures of the process, but there is (supposedly) actual bacon in my fridge now.

I didn't get the smoker going, but one source I had said that I should put them in the oven at 200* for 20 minutes. I did, and I don't think that was enough overall. Next time, I think the meat thermometer will come out and I'll go with that method. Also, I should sharpen the knives, because removing the skin was a massive pain.

I did cut off a slice, and it seemed to taste okay, so there's that. I'll try this again, change things up a bit, and fix the process.

We now return you to Fabris, already in progress. Yay!
Posted by Donovan Shinnock at 5:49 PM 3 comments:

So I was reading about curing meats online (hooray Goons With Spoons) and the description of how to make bacon seemed pretty easy. Specifically, the nice person who posted it took this recipe from Ruhlman: 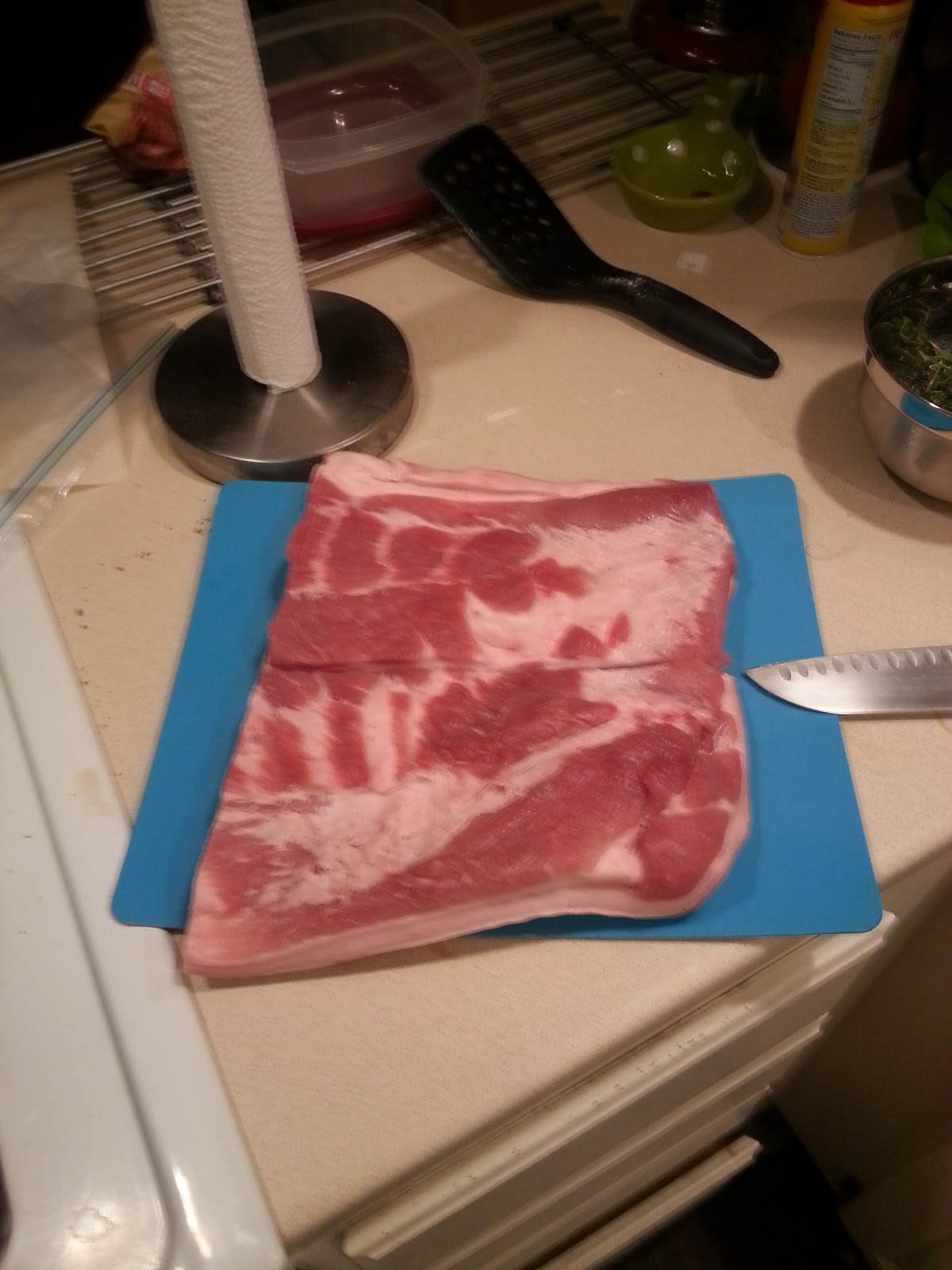 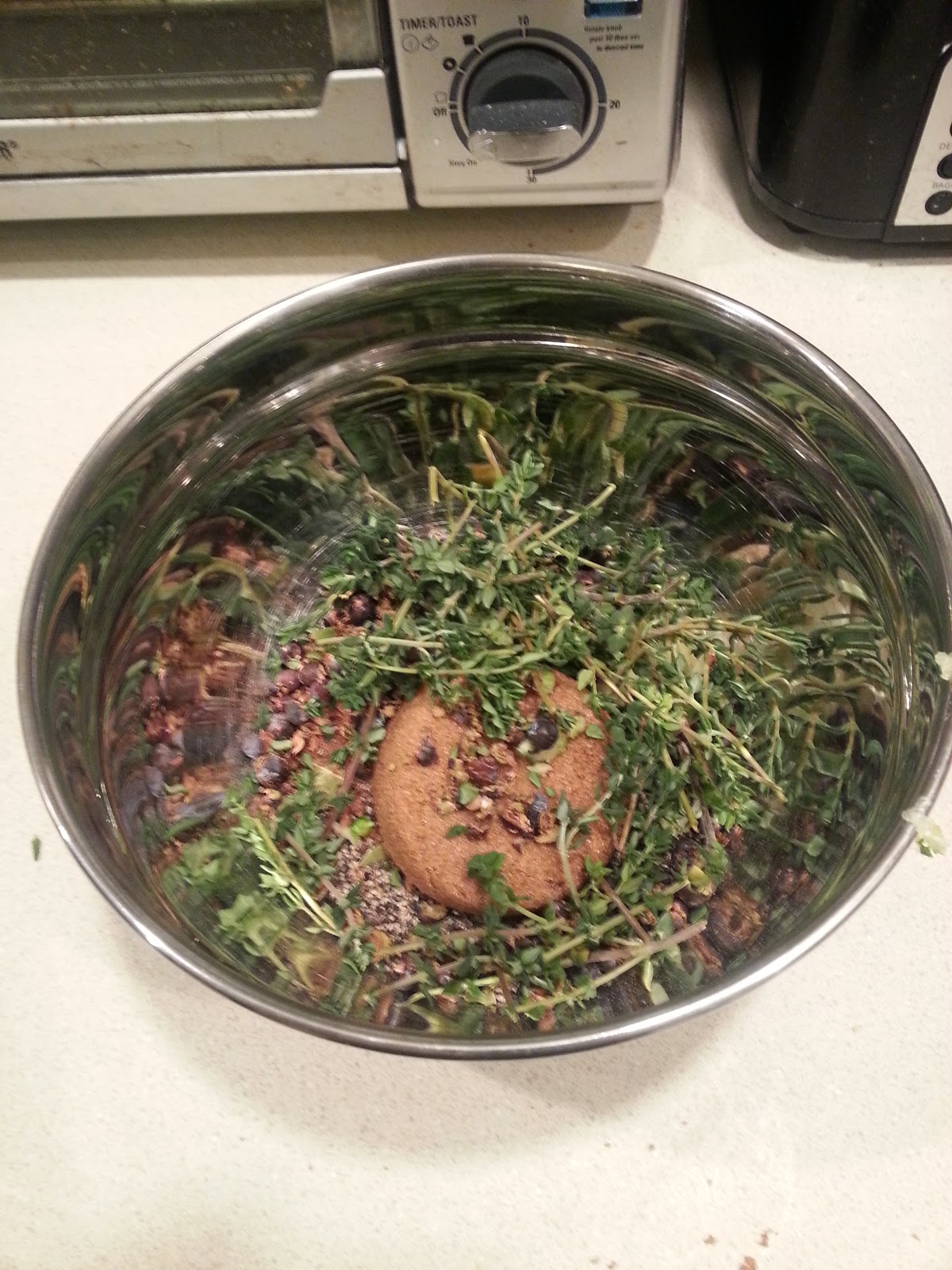 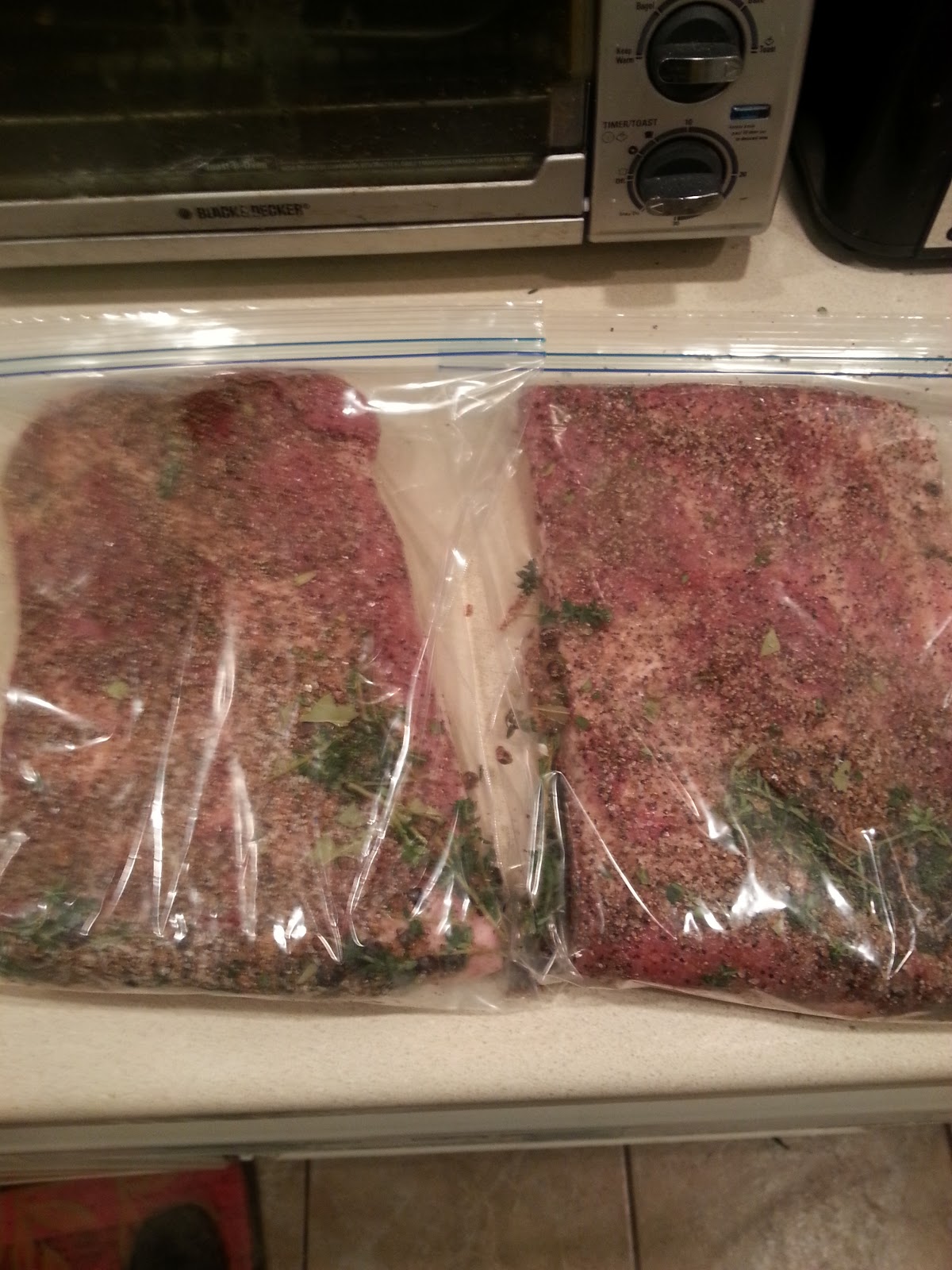 Then, the recipe says:
"Put your belly in the zip-top bag or on a sheet tray or in a plastic container. Rub the salt and spice mixture all over the belly. Close the bag or cover it with plastic wrap, and stick it in the refrigerator for seven days (get your hands in there and give the spices another good rubbing around midway through).

After seven days, take it out of the fridge, rinse off all the seasonings under cold water and pat it dry.

Let it cool and refrigerate it until you're ready to cook it. But I know. You won't be able to wait. So cut off a piece and cook it. Taste it, savor it. Congratulations! It's bacon!"

So I did that! I have no idea if I used too much or not enough cure on the proto-bacon, but I covered it in the mix and put it in the bags. Maybe I needed to really pour like half of it in there? I'll try that next time, but I used most of it on the two bags, so I don't feel like it'll be too bad. Anyone know if I should do that, next time around, though?
Posted by Donovan Shinnock at 6:26 PM 7 comments: