I love the pedagogy of Fabris. He's clear, he breaks up the manual in a way that makes sense to me. I can follow what he's saying and doing.

On the other hand, I find myself actually fighting like Capo Ferro or Giganti, especially the more I learn about them. (The response to any motion is to kill you!) Not just because of the stances, but other things, too.

I'm not sure where that puts me, but it's interesting.
Posted by Donovan Shinnock at 8:37 PM 2 comments:

Recently I was pointed at Guy Winsdsor's video describing Capo Ferro's hierarchy of defense. It's one of those things that summarized a lot of dispersed information in his manual in a really concise and excellent way, and helped me get a much better understanding of Capo Ferro.

The comments on the video summarize the procedure, but not in a way that I could use as a way to introduce this drill to people - let alone really integrate it into my own brain - so I'm re-writing it up here in a way that will be useful to me, and hopefully other people.

In short (and hopefully correctly), through Capo Ferro's manual, a consistent set of responses and counter-responses can be found. The most common attack in rapier is, once your blade has been gained, to disengage out of stringere. Guy uses that term, I'm used to cavazione, so let's roll with that for consistency.

Capo Ferro flowcharts out four possible defenses for this attack. They are:


Each of these defenses, naturally, has a counter. So when your opponent gains your blade, you feint with a disengage to flush out one of those defenses and then you counter it. (This is the core of the way the Capo Ferro plates are set up: Action, Defense and then Action, Defense, Counter.) The counters are:
From my quick glance now, it looks like a drill could be set up to chain one into another into another, but practicalities of range, hitting the other person, and working an action out of a void would probably cause it to break down a little over time. Still though, it's a thought.

The basic drill is, in effect, to recreate the plates from Capo Ferro, running through everything in sequence. So it goes like this:
Guy does bring up a very good point near the end of the video, that is well worth keeping in mind: Four possible actions can come out of you performing a feint. You need to be able to predict (or better, force) your opponent's reaction. How do you do that? Discuss!

I'm progressing on this little project and it's making me happy, so all of you get to hear about it and get proof of me learning things. Or something.

Anyway! I'd gotten my hands on a marking wheel, so I laid out one of the pieces of leather, put the pattern on top of it, and traced along with the wheel. Then I put the two pieces of leather together, got my leather awl, and drove holes.

I learned a couple of things at this point: 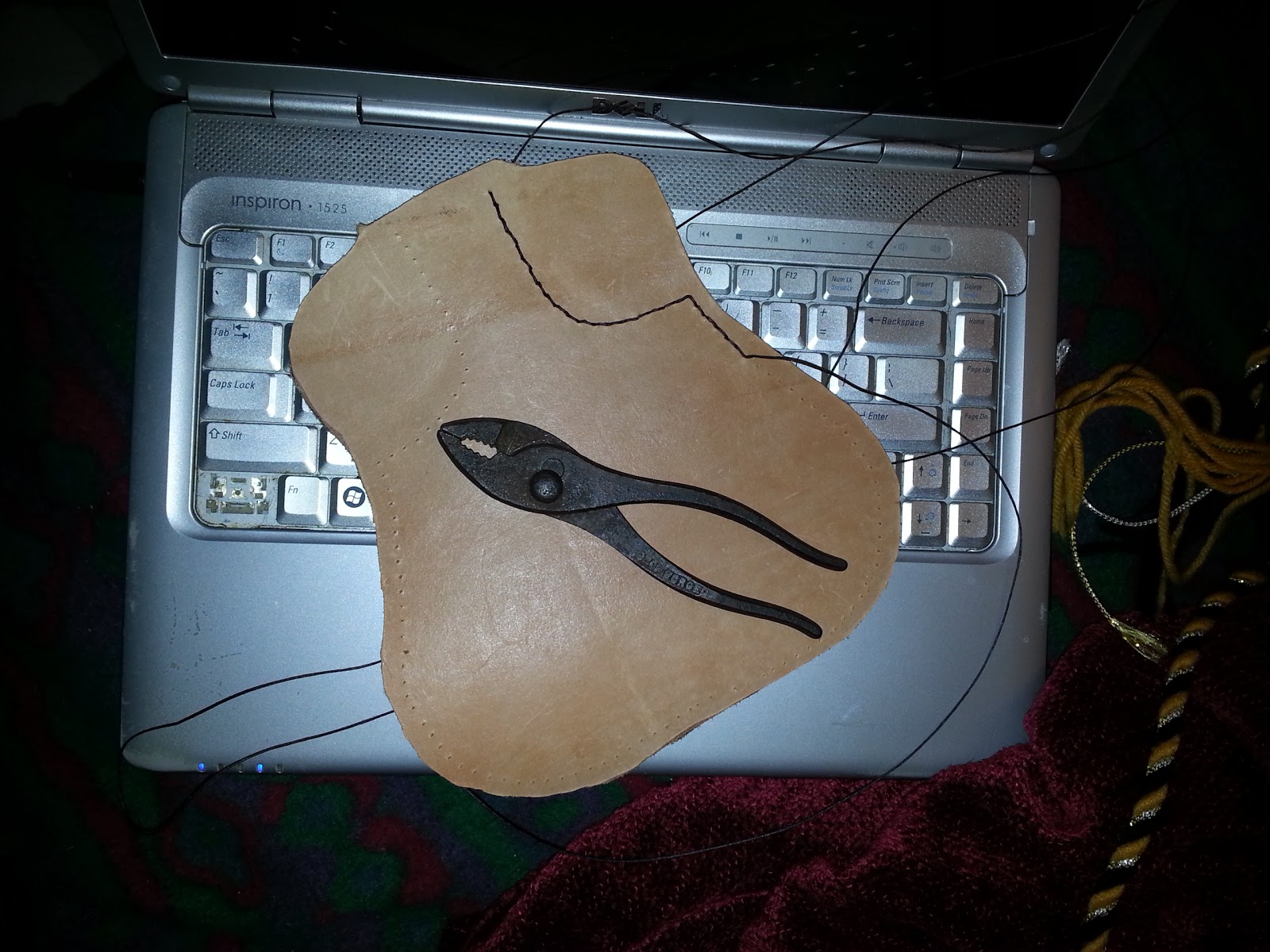 So, yeah. I've got a newer better awl set on the way to me (thanks, Amazon!) and I'll be putting more holes in the leather soon. Here's a Value-Added Picture of how things looked shortly after I got going - I took a break on it yesterday evening and I was about halfway done stitching around the outside. I'm using what I think of as a two-needle figure eight stitch, because that's what my friend Alex taught me to do with leather.

Next step - finish the stitching and then go pound sand!